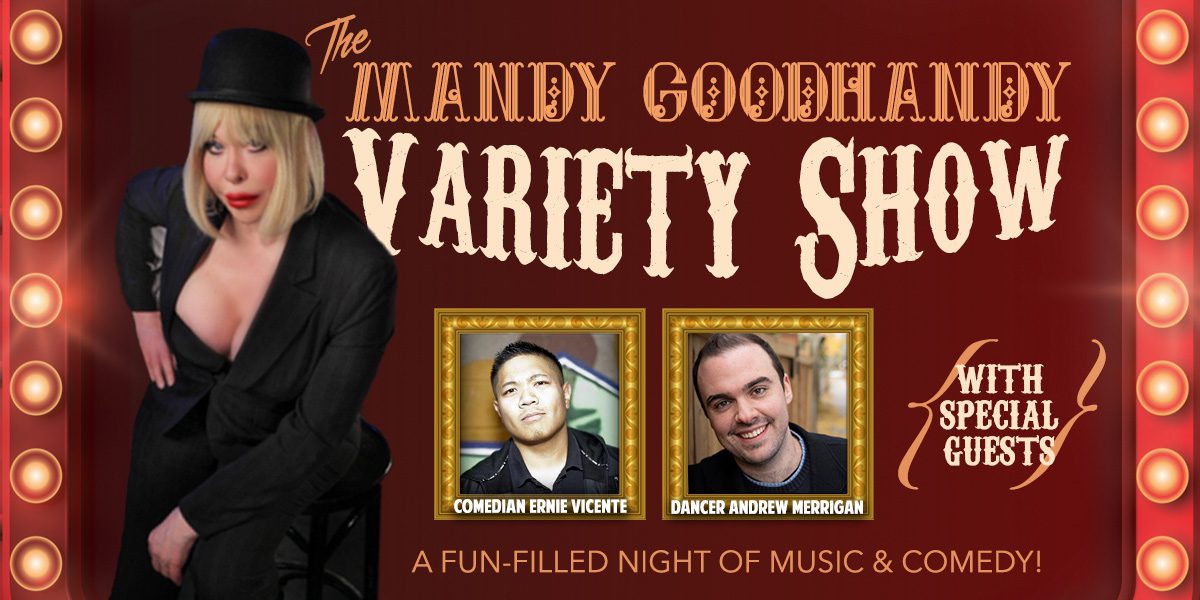 Featuring — Lady and the Rambler, Mandy Goodhandy and Sebastian Ellis

Sebastian Ellis is a singer-songwriter and pianist. His extensive repertoire covers a wide range of rock n' roll, jazz, blues, and country songs from the 1940s, '50s, and '60s, along with an impressive selection of original material. Mandy Goodhandy is a singer, comedian, and author who dips into her background of Music Theatre and Cabaret.  Her choices of torch songs and ballads are counteracted with her funny style when speaking to the audience. The combination of the two is a perfect blend of styles that leave an audience feeling they just stepped back in time to vaudeville with a touch of Memphis Tennessee meets Broadway.

Andrew Merrigan is a multi-faceted performing artist, filmmaker, and choreographer. Andrew began dancing at age 2. His taps have taken him from Maui, Hawaii to Riesa, Germany, and everywhere in between. He has trained throughout North America with the greatest tap dancers to ever wear the shoes. Since graduating with a BFA Dramatic Arts – Theatre (Performance) from the University of Lethbridge, Andrew has been seen on stages around Canada and on television sets in North America. Andrew’s passion for telling stories is what drives him to write, produce, and direct. He has received praise for his work as a theatre director and filmmaker in Canada.

Ernie Vicente is a Filipino stand-up comedian from Toronto. With his surreal observations and quick one-liners, Ernie has been entertaining audiences since 2008 starting at the world-famous Yuk Yuk’s comedy club in Toronto. He has performed in clubs such as Absolute Comedy, The Second City, Montreal’s Comedy Nest, and most recently at comedy clubs in Los Angeles, Sacramento, and New York City. He was just featured on CBC's Laugh Out Loud program and has been a part of the NXNE and JFL42 festivals.

Bryan has been performing Stand Up Comedy for two years in venues such as 120 Diner, Second City in Toronto, and The Broadway Comedy Club in NYC. He really enjoys lacrosse, talking to himself, and especially laughing with himself.